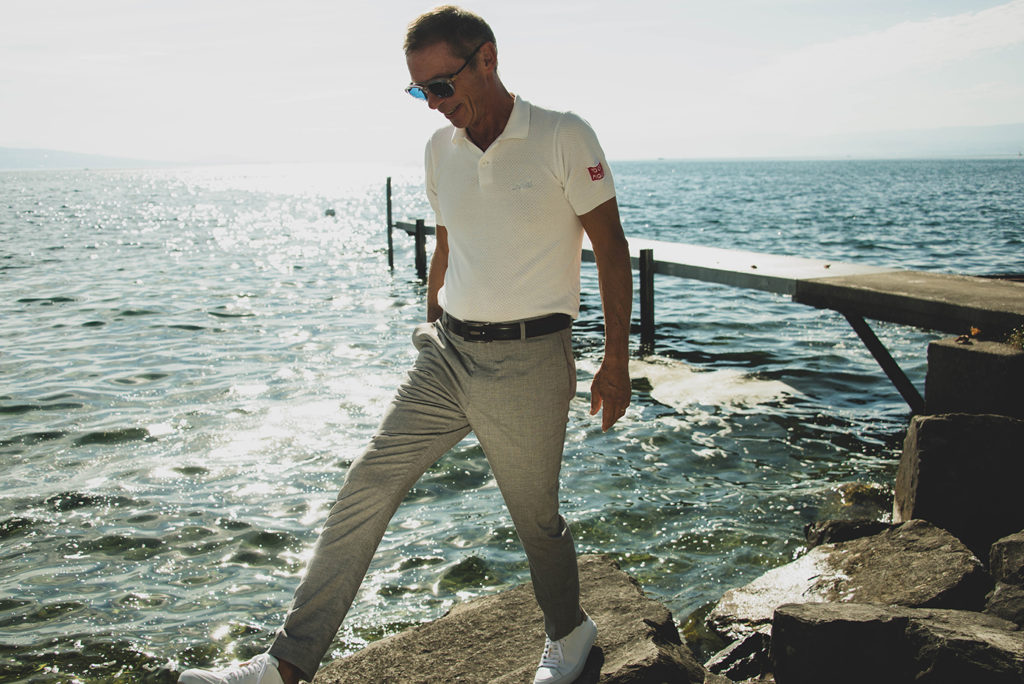 How did you come up with the idea for the R18 Superdriver?

After the R8 Mark II, I was looking for a smoother way for the belt strap to travel. And it’s actually ideal to have a buckle on wheels so it can travel from one side to the other. That’s the basic idea. With the R22 Bugatti buckle model I did, it had four wheels where the ardillon rolled on the wheels and not on the belt, and now with this R18 model, the belt and the ardillon are both rolling on wheels, and this gives the beautiful leverage. 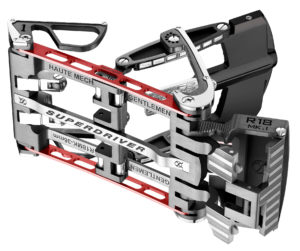 How did the idea to incorporate car design into the buckle come about?

The concept came from a client who had just bought a Bugatti Chiron. I had already shown him the principle of the SUPERDRIVER system and he loved it. He asked me if I could do something that would remind him of his car. And then, in my office, I have Scalextric cars on a shelf, all lined up looking at me. Every day I walk past them, and you know, designing is also daydreaming.

How do you make the buckle?

Paradoxically, not at all like a car!! Car design is mainly casting, which means everything is made from moulded parts—mainly from carbon, aluminium and steel.  The reason I work with the watch industry to make my mechanical belt buckles is because they have functions, and moveable parts, so they should be made in the same way as a watch, following the same criteria. They need to be milled on a CNC machine for the parts to interact properly and for the longevity of the piece. For this series, the idea is to create the emotion of the super car, in such a way that you can still mill it with a CNC machine. It is kind of a celebration of the system – supercar, super movement, Superdriver!

You are working with a new partner, Montanari. How is the collaboration going?

Before, I only had one CNC machine and several projects and you can’t do several projects on one CNC machine at the same time! At Montanari, not only do they have several different kinds of machines, that can make a wide variety of parts large and small, they are also skilled metallurgists and have all kinds of steel. I was aware that there were different kinds of steel, but I didn’t know that you can actually make your own perfect steel cocktail. It is mind-blowing!   I can continue to do men’s accessories like belt buckles, but I can also make furniture, housewares, and even sporting goods if I want. The future is wide open and it is always going to be mechanical, that’s for sure.

When you look at the R18 Superdriver buckle, what are you most proud of?

I am proud of the new closing system which secures the leather strap into the buckle.  It has the same leverage as the R8 series closing system but because the clip is built at the back of the buckle and not under it. It results in a very sleek model from the side view ­– just like a sports car.

What models of car are you working on right now?

I have a client at the moment who would like me to re-create the lines of the Aston Martin DBS into his buckle.  Like I say, it is a big step from creating the illustration and then transforming it into something that is feasible to mill. You have to follow the step plan to take the material away. One mistake and whoops, you have a cabriolet! 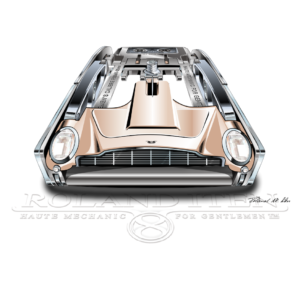 Could this supercar concept also work with a vintage car?

You can do cars, but honestly, if someone wants to make a lion or a tiger, that’s possible too! It is an artistic interpretation of the owner. It is really first about the owner and then the emotion which creates a bespoke product. Sure, I prefer cars, but I never say never. Everything is possible.

What are the customization options for the R18 Superdriver?

There is white or rose gold, or a mix of golds, which is very nice. If you want to have the belt buckle coloured to match your car lacquer or interiors, then we can use coloured titanium and/or aluminium. For me, it is important for the belt to have a certain weight. When the belt is too light, it doesn’t feel so luxurious.  Like with many things in life, more is better!

If you were making an R18 Superdriver for yourself, which supercar would you choose?

That’s a good question. Actually, I would do a Lamborghini Aventador. I love it, and for milling it would be fantastic. It’s like a diamond cut. This would be really interesting. A McLaren would be very interesting too with its lights. I mean, it’s nice when a car has a really strong typology, like the Enzo Ferrari too. These kinds of cars actually make it quite easy to create fantastic buckles. I guess I’ll never make one for myself—I could probably never decide on which one and would need to make several – too expensive!